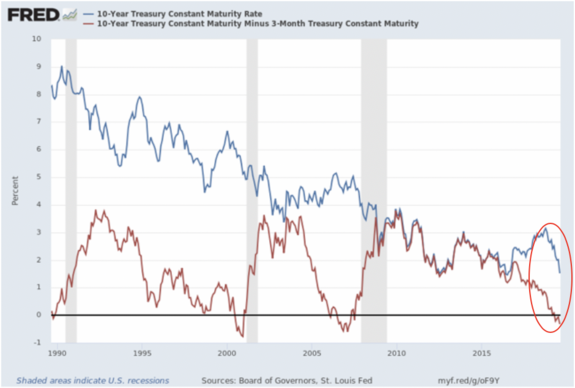 SBA 504 debenture rates have plunged over 1 percentage point in just six months. Debenture rates closely track the ten-year T-note yield and we can see in the chart below (blue line in the red oval) the sharp downward move. At the same time, the yield curve has become inverted for several key maturities.

Also, in the oval in the chart below is the difference between the three-month T-bill and ten-year note yields. We can see that this relationship typically turned negative before prior recessions. This indicator is a pretty reliable measure of the rising risk of economic slowdown or recession over the next year or so.​

The reasons for rising risk of a slowdown (from a low growth rate by past standards) or recession, and associated plunge in bond yields, have been well-documented and include:

Historically long US economic expansion which implies that some sort of correction is overdue. Fiscal and/or monetary policymaking typically had its hand in ending economic expansions but one cannot overlook the length of an expansion as a factor in the economic and business cycles. Interest rates drop in anticipation of a central bank rate cutting cycle.

Disruptive policies and political actions. Here is the wild card for this cycle. There probably has not been such direct intervention, with global effects, by the executive branch since the Nixon Administration imposed wage and price controls and pressured the Fed to cut the policy interest rate. A key difference is that the Nixon Administration wage and price controls came at a time of unusual peacetime rising inflation. There was no proximally worrisome macroeconomic reason for the Trump Administration to engage in current trade policies, so the shock effect has been widespread. President Nixon successfully pressured the Fed to cut interest rates going into an election cycle. President Trump’s pressure on the Fed, which cut policy rates in July, is a political echo of Nixon. Yet the pressure also relates to the impact that his trade policies have had to dampen animal spirits in the domestic and global economy, and financial markets, as the global supply chain struggles to adapt.

Struggles Overseas. Even without the disruptive force of US trade policy, the EU continues to struggle with recovery from the one-two punch of the Global Financial and following Euro Crises, and the looming haymaker from Brexit. For years now, the European Central Bank has kept the main policy rate negative and today the entire German yield curve sports negative yields. France, Belgium, Netherlands, Switzerland and some Scandinavian countries feature negative yields on ten-year government bonds. Spain and Portugal, central actors in the euro crisis have ten-year yields just above zero. Selected private sector corporate and mortgage yields are negative in some cases. Japan remains mired in a negative interest rate world. China’s economy is slowing for reasons including internal imbalances and the Trump tariffs.

The Result: Very Low SBA 504 Debenture Rates. In this cycle, many of the old rules seem gone to the wayside. Over $16 trillion of global government bond yields are negative. Despite the plunge in Treasury yields, US bonds post the most attractive (and still positive) yields of any advanced economy. Investors seem resigned to the possibility that US yields might turn negative in the next recession. The rush into positive-yielding US bonds has neutralized the spread-widening impact that an inverted yield curve and higher expected market volatility typically has on mortgage-related bonds such as SBA 504. Also, SBA 504 effective rates are sharply lower than the Prime Rate despite the Fed rate cut in July. We expect SBA 504 debenture rates to remain relatively low although subject to corrections higher as events play out.